The work of Theaster Gates is deeply engaged in material and cultural preservation, especially as it relates to historical and contemporary power dynamics. From reactivating archives, such as those of the magazines Jet and Ebony, to recovering and repurposing buildings on Chicago's South Side, Gates's expansive practice also includes work in ceramics, painting, sculpture, installation, music, and performance. Drawing from diverse sources and narratives, he produces work that invokes the preservation and thoughtful examination of oft-neglected or distorted Black cultural and social histories, aspects of contemporary life that continue today to be dangerously misunderstood or misconstrued by hegemonic powers both within and outside of the arts.

“A signature of Gates’ works is his ability to embrace the hybridity of cultural signifiers… He moves between the powerful historical referent that is often part of the weightiness of black history, and a formal reference that is more often than not part of a mostly white art history."[i] 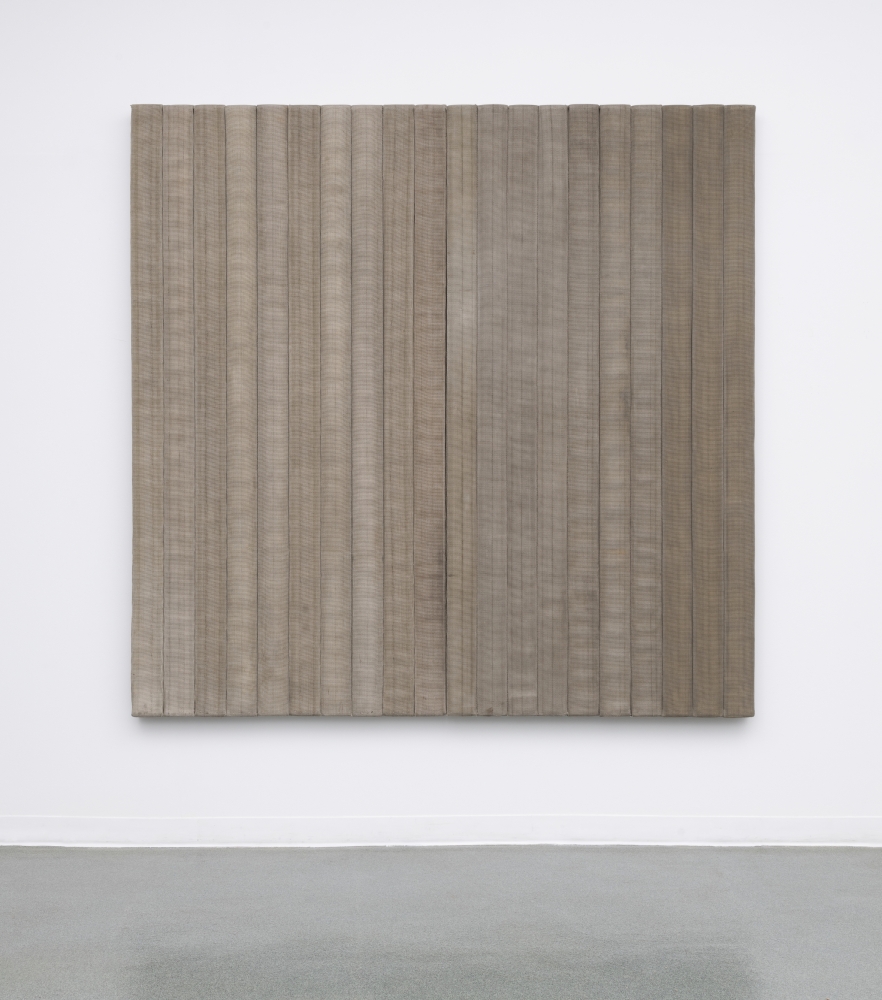 Gates’s ongoing Civil Tapestries series, begun in 2011, are made with strips of decommissioned fire hoses sewn together. The works presented here are from a new body of work called A New America. The history of the rugged fabric draws attention to the use of hoses against Black people during the struggle for civil rights, perhaps most notably in Birmingham, Alabama in 1963. The series pays tribute to the suffering of those on the front lines of the long campaign for equality, and offers meditative resolve to all those still bearing the burden of the march towards racial justice in America.

At the same time, and consistent with the artist’s larger interest in reenvisioning political markers within cultural history, the impact of the Civil Tapestries extends beyond their immediate and grave historical status to renegotiate art historial ideology:

“A signature of Gates’ works is his ability to embrace the hybridity of cultural signifiers… He moves between the powerful historical referent that is often part of the weightiness of black history, and a formal reference that is more often than not part of a mostly white art history. Through this interchange, the two become inextricably braided, complicit with one another.”[ii] 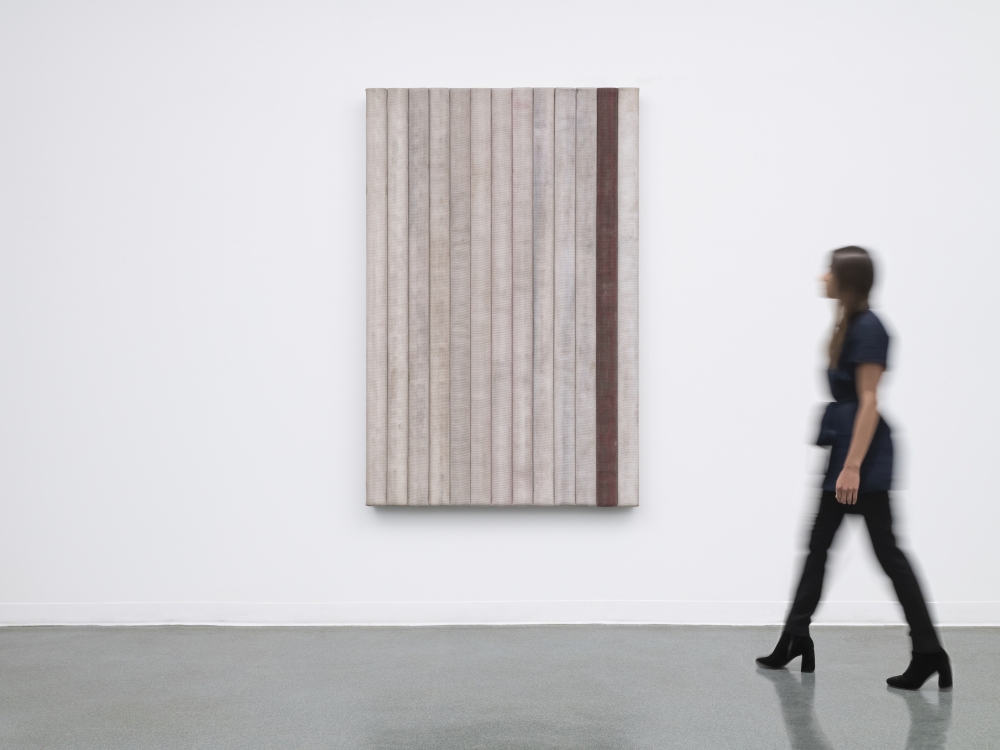 Gates looks toward the canonical figures of minimalist abstraction, but approaches the cult status of these artists through materials that highlight Black experience. For his 2019 exhibition with Gray, Every Square Needs a Circle, Gates elected the grids of Agnes Martin as foundational to his exhibition. To Gates, Martin’s gridded works, produced by repetitive gestures, remain a testament to the powerful, soulful potential of relatively quotidian movements like arranging and layering, movements the Chicago-based artist relies upon to work every medium, whether ready-made materials like hoses or tar or clay. Frank Stella, too, is of deep relevance: the width of the stripes in his black paintings was determined by the dimensions of the wooden canvas stretchers, a ready-made facet of the work functionally similar to the gauge of the fire hoses repurposed by Gates. This art historical lineage is just as critical to Gates’s practice as the history of quilting in Gees Bend, Alabama, another source of inspiration for this series. Orbiting around the stories of collective Black experience, Gates puts forward his Civil Tapestries as monuments to the ongoing struggle for civil rights. 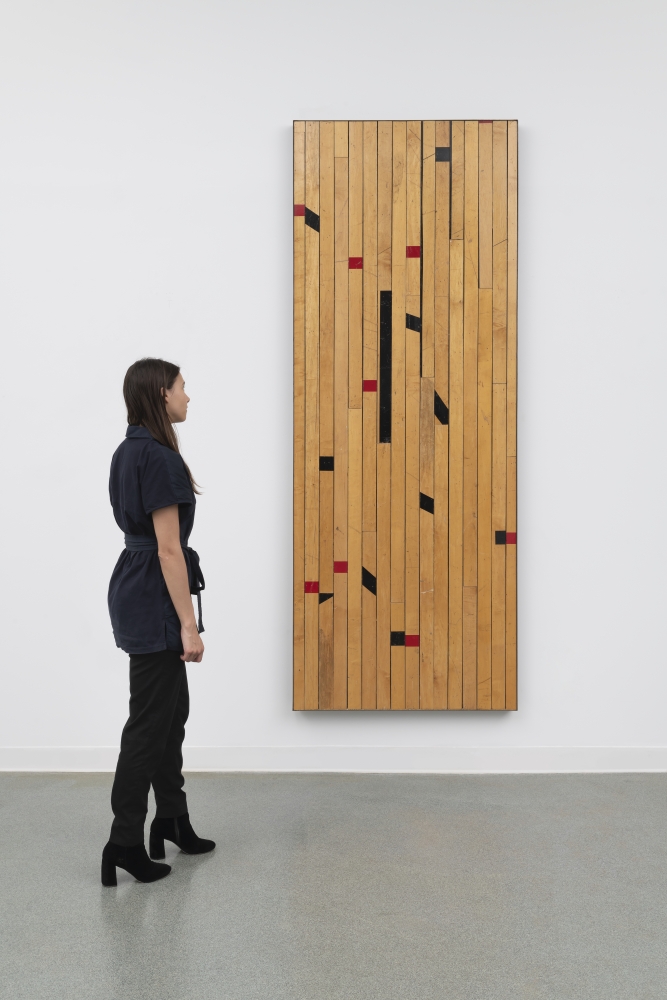 Painting, 2017-20 is related to Gates's Ground Rules series, in which he continues his twinned dialogue using historically weighty materials in relation to the history of painting. In this series, his compositions are made up of floor-boards that are salvaged from high school gymnasiums decommissioned by the City of Chicago. The gym floors largely come from schools in the city’s most socioeconomically disenfranchised neighborhoods, which Gates views as a direct index of the systemic oppression of the Black community. The Smithsonian American Art Museum, which houses a work from the series in its collection, addresses this unmistakable reality in its contextualization of the work:

"For Gates, the rules represented by the athletic markings on a gym floor are a crucial way in which children learn a larger social order; a lack of access to gyms [and schools for that matter] becomes, over time, a lack of understanding of the rules both big and small.”[iii]

In this series, Gates preserves the floors and subjects them to a new order rearranging the planks, flecked with color, to be in dialogue with the lightness of geometric abstraction. In relating Gates’s broader practice to W.E.B Du Bois’s concept of "double-consciousness," art historian Lisa Yun Lee notes, “The art lives ‘betwixt and between’ in both black and white worlds. This ‘two-ness’ troubles any stable or easy meaning, which propels the restlessness of the work.”[iv]

“Well, I think even when I was learning clay, it wasn’t about clay.
It felt like clay was a philosophy. The more you learn about the
material, the more you understand its philosophy.” [v] 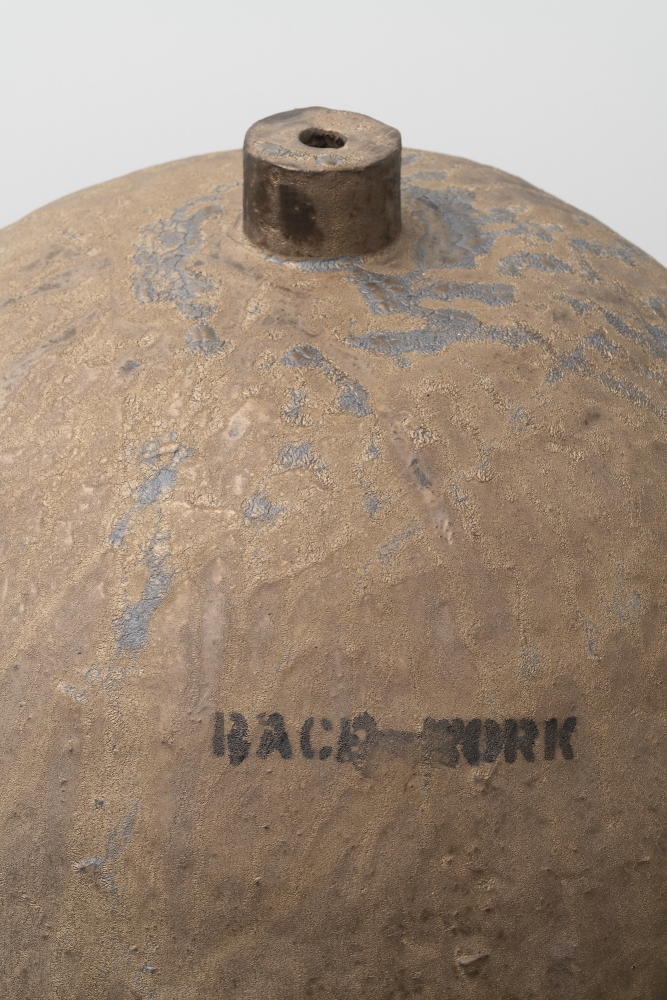 Ceramics have always been central to Gates's practice and his development as an artist. While studying urban planning at Iowa State University in 1994, Gates enrolled in a ceramics class with Ingrid Lilligren, whom he has described as his “only actual art teacher” given that he has never formally studied art. Beyond that initial formative moment of working with clay, Gates has followed his curiosity for learning about materials and makers throughout history. After graduating from ISU, he wandered across countries until he found himself in Tokoname, Japan. His time spent in Japan spurred him to dedicate much of his work at the cross-cultural intersection of Japanese minimalism and African-American history.

His work as a potter has been deeply influenced by Japanese and African-American craftsmen, and two historical figures whose influence Gates most draws upon are David Drake and Shōji Hamada. Known as Dave the Potter, Drake was a slave in antebellum South Carolina who defied slavery law, including those against literacy, by signing each pot with his name and often with couplets or poems. As Tate curator Achim Borchardt-Hume writes, “Among the many who were deprived of their right to be seen as individuals, to have an identity and a history that could be translated into a memory, Dave asserted these rights by naming what he had made."[vi] Gates’s Bronze Race Work, pays homage to this history in a new series that incorporates language overtop the ceramic glaze. 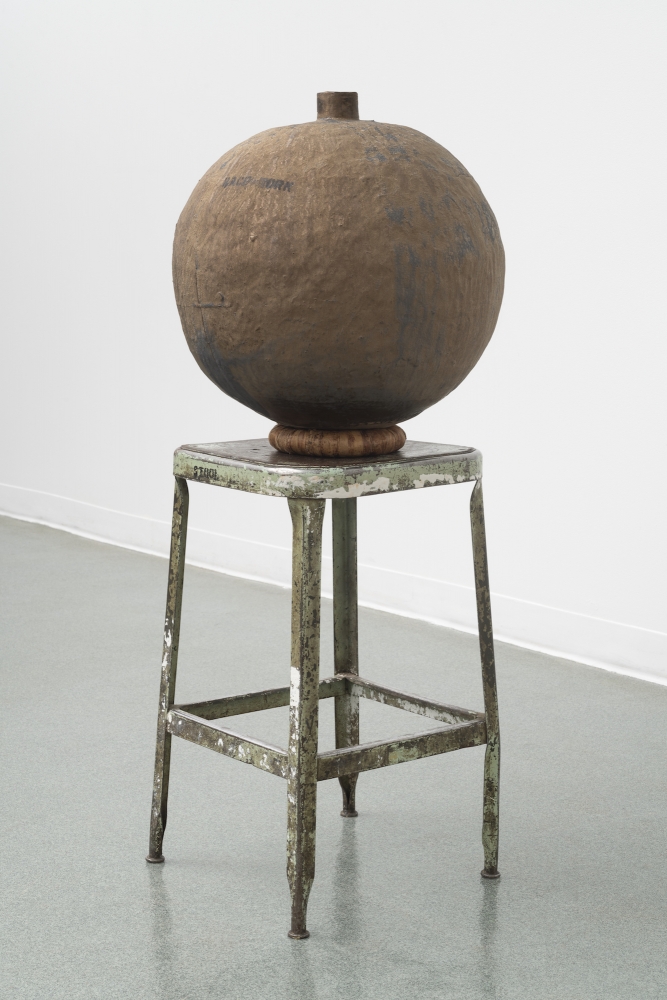 In his ceramics studio, Gates also looks to Hamada, a leading figure of the Japanese folk-craft movement Mingei that celebrated the simplicity and utility of quotidian objects, including those created by unknown makers. Hamada’s insistence on using materials sourced locally near his workshop in Mashiko—not just clay, but even his glazing brushes made from dog hair and bamboo—resonates with Gates’s reclaiming and repurposing materials throughout each facet of his practice. [vii]

Gates’s ceramics practice exists as an amalgamation of these two guides—one, in appreciation of the austere, almost anonymous aesthetic of utilitarian wares, and the other, as an overtly political and liberating statement of Black craftsmanship and autonomy of labor.

“Tar, unlike metal, feels more human to me. It catches other materials in its
proximity. If it’s too hot, it sweats. If it’s too cold, it becomes frigid and it chips
off and breaks. It is extremely volatile, emotional, and unpredictable.”[viii] 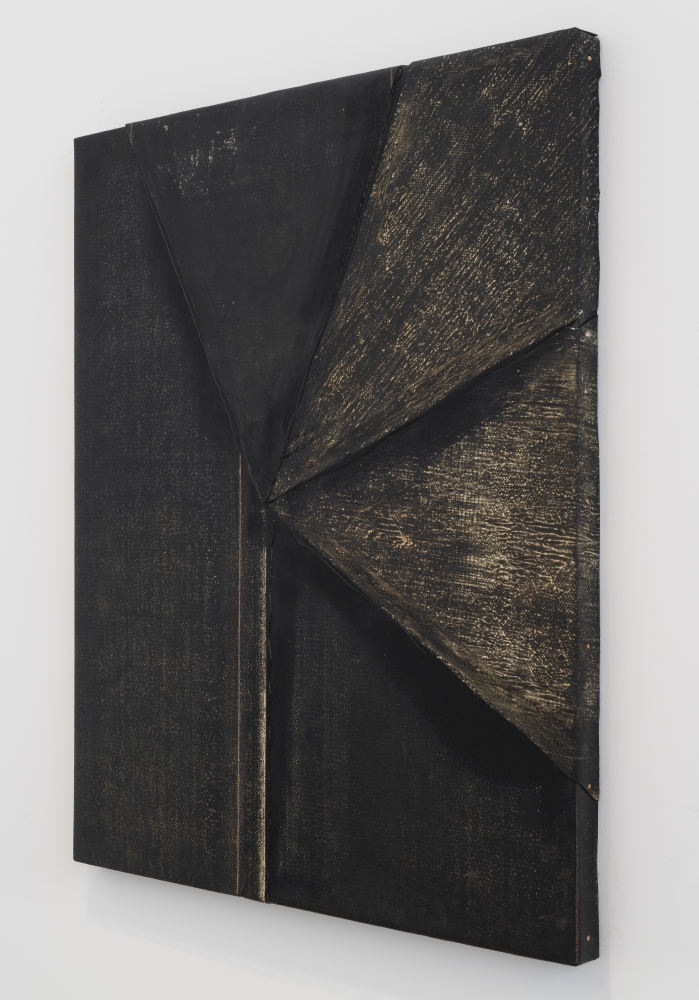 Rubber, tar, and tarpaper are familiar materials to Gates, and he uses them throughout his practice in diverse ways, sometimes additive to his sculpture but also as the primary materials of his works. Gates inherited both the skills to work with these materials and, in a less literal sense, the materials themselves from his father, a builder and roofer by trade. The painting, Highway with Mountain, is part of a series in which Gates deploys and elevates the craft of roofing, placing it in critical conversation with modernist and abstract art histories.

As the artist states “Tar was my first true material and roofing my first vocation. Maybe there is a way that I can use roofing as a parallel to other forms of craftsmanship. Artists such as Henry Moore or Richard Serra know metal very well, they understand casting. Before they were fancy, they were in their studios working with the metal, first making smaller objects, and then thinking conceptually, and then making more elegant works. I entered art through roofing.”[ix] 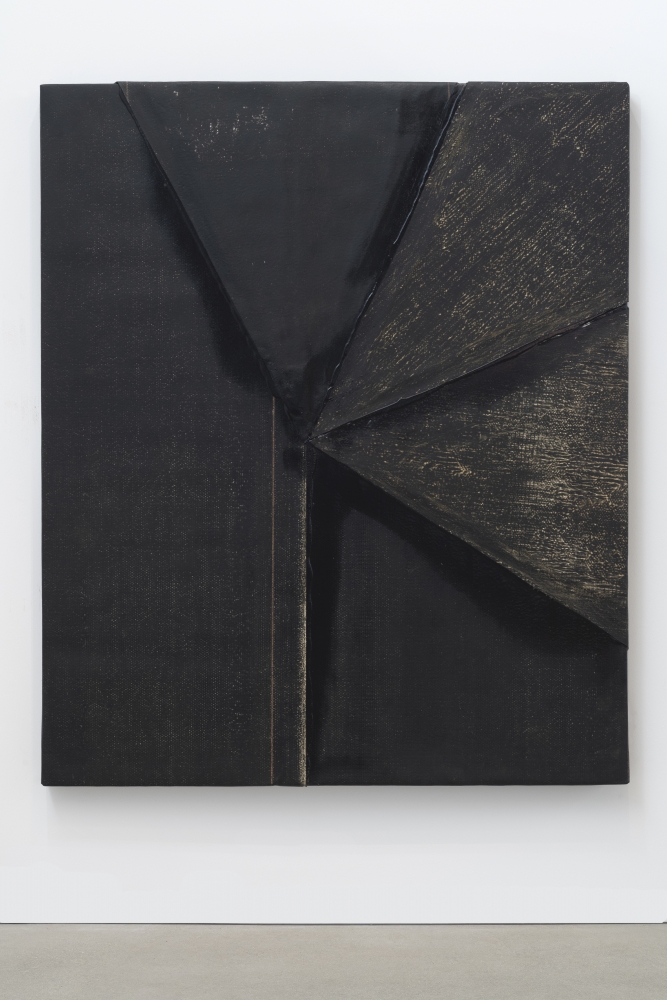 Gates’s use of tar, as art historian Lisa Yun Lee states, “is another example of his compulsive desire to revisit materials from earlier works and expand their meanings through formal investigations.”[x] While Gates uses these roofing and building materials to evoke greater political significances, his interest in the materials is also formal, as he says these works are where his “formalistic investment in roofing meets art formalism.”

Lee goes on to say “The paintings also function as a textured exploration of blackness and fascination with surface. Gates uses tarring mops to create the work, and while the labour of making these paintings is clear, the hand of the artist is not dominant. It is the colour and depth of the paintings and the desire to represent blackness that is so impressive. In Odilon Redon’s words, 'Black should be respected. Nothing prostitutes it. It does not please the eye and does not awaken sensuality. It is the agent of the spirit much more than the splendid colour of the palette or the prism.'"[xi]

For the full video of Theaster Gates speaking with Michelle Grabner and Zachary Cahill at Gray Warehouse, click here.

Theaster Gates (b. 1973) was born and raised in Chicago, where he currently lives and works. Drawing from his earlier vocational pursuits in public service, urban planning, and religious studies, Gates works to redeem spaces that have been left behind, centering his practice on the possibility of the “life within things.” Known for his recirculation of art-world capital, Gates’s recent artworks possess an intersectional relationship between space theory and land development, sculpture and performance, smartly upturning art values, land values, and human values. In all aspects of his work, he contends with the notion of Black space as a formal exercise—one defined by collective desire, artistic agency, and the tactics of a pragmatist.

Gates has received numerous awards and distinctions, including the Nasher Prize (2018), the Kurt Schwitters Prize (2017), the American Academy of Arts & Sciences Award (2016), the Smithsonian American Ingenuity Award for Social Progress (2015), and the Hirshhorn Museum and Sculpture Garden trusteeship (2015). Public collections include Whitney Museum of American Art, New York; The Museum of Modern Art, New York; Tate Modern, London; and the Museum of Contemporary Art, Chicago, among many others.